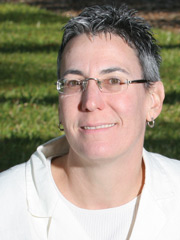 The first is understanding the history of U.S. railroad development in the 19th century and its impact on the development of modern recreational corridors on old rail lines.

“While the legal issues are quite complex is rail-trail conversions, the policy issues are even more important,” Wright says. “We are at a crossroads in our view of public property and the rights and obligations of government to be wise stewards of public lands, while also promoting private property, transportation and economic development.”

Wright argues that because of the very public character of railroad development in the 19th century, public involvement in converting the old rail lines to recreational use is justified.

Wright’s second area of interest is the history of family law in England.

She is currently working on a book that tracks the development of family law from the last vestiges of feudalism, through complete patriarchal rights, to the more modern approach which focuses rights with the mother.

“This work focuses heavily on certain important legal developments in the 18th and early 19th centuries, culminating in the creation of the divorce court in 1857,” Wright says.

Wright is also developing books specifically focusing on the legal records of the divorce court, and even more specifically on the experiences of one family.