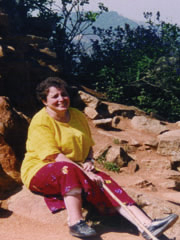 As a historian of southern Africa, Luise White’s work spans, and often integrates the politics, and social and cultural history of the area.
White, a professor in the UF history department, researches the renegade independence of Rhodesia (now Zimbabwe) from1965 to 1980.
“I got very interested in the subject, but as I did more research, I learned about the Rhodesian Army during that war,” White says. “So the history of the state will take a backseat to a history of the army.”
White says that Rhodesia’s war to defend minority rule and a way of life, was fought with twice as many regular African soldiers as white ones.
“Many young conscripts openly doubted the Rhodesian project, and almost as many evaded the draft,” she says. “The army was exceptionally distrustful of the state and the state was actively suspicious of its specialized units.”
White has already done extensive research in Zimbabwe, South Africa and in the Rhodesian army papers held in England, as well as the literary production during war years.
Her first book, The Comforts of Home: Prostitution in Colonial Nairobi, won the Herskovits Award of the African Studies Association for Best Book of 1991.
“Luise’s work is widely respected within the profession, not just among Africanists, but also beyond the boundaries of her own geographical specialization,” says Brian Ward, chairman and associate professor in the Department of History.