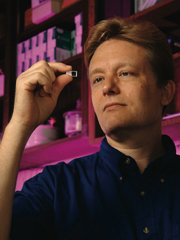 Eric Wachsman, a professor of materials science and engineering, saw first-hand how important energy is to a state’s economy and how certain choices directly effect our environment while growing up and attending college in California.

Since I was a kid in California, I was interested in energy. I saw that it was something that was important,” says Wachsman, director of the University of Florida Department of Energy (DOE) High Temperature Electrochemistry Center. “We just do not produce enough energy within the U.S. to meet our demand.”

The thing that distinguishes it from other fuel cells we’ve heard about is it can run on our existing fuel infrastructure, from natural gas to gasoline, in addition to hydrogen,” Wachsman says. “It could be employed in a short period of time without having to switch every gas station in the U.S. into a hydrogen filling station, but it could work on hydrogen, as well as all those other fuels.”

His group also is developing hydrogen production technology and sees Florida as a potential leader in the effort to create more efficient energy options and reduce the harm to our environment.

Energy is a major issue not just in the future but now,” he says. “I’d like to see the College of Engineering have a focus on energy and the university as a whole develop an energy institute and lead the state and the nation in developing more efficient utilization and production of energy.”