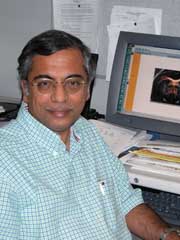 Professor of Computer and Information Science and Engineering

“One of my goals is currently geared toward developing computational tools for automatic 3-D shape extraction and analysis of cortical and sub-cortical structures in the human brain,” he says.

Vemuri’s approach is to map a “normal” human brain, then compare it to the anatomical structures in patients with neurological disorders like epilepsy and schizophrenia.

“If an MR brain scan from a subject with a neurological disorder is available, one can see what kind of changes are there in the anatomy in comparison to the reference,” Vemuri says. “One of my goals is to build this atlas with which I can automatically compare and contrast the 3D shapes of cortical and sub-cortical structures obtained from a subject with certain disorders.”

Another part of his research is the development of computational tools for mapping out the nerve-fiber connectivity patterns of the brain using a relatively new type of imaging called diffusion weighted MRI.

As Director of the Center for Vision, Graphics and Medical Imaging, Vemuri has accrued more than $3 million in funding for his research.