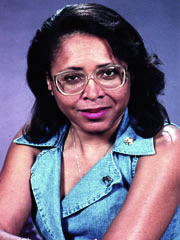 Minority groups who were denied access to the mainstream press during the Civil War era has always intrigued Bernell Tripp, an associate professor in the College of Journalism and Communications.
“My primary focus has been 19th-century black press history, as well as the journalists’ interrelationship with abolitionist editors, because this seems to have been the crucial phase of evolution,” Tripp says.
Her research has led to three soon-to-be-completed books-The Origins of the Black Press: New York 1827-1847, the second edition; Black Women Journalists, 1825-1860; and The Black Press: Evolution of a Minority Voice in the Media.
“My ultimate research goal is to show that mainstream mass media development required the contributions of specialized presses operating ‘outside the margins’ to reach its current state of evolution,” she says.
Tripp’s future research will concentrate on those black-owned publications operating during war years, as well as those located within the confines of the South during the war and Reconstruction.
“The true value of the research is its ability to fill some of the gaps in American history,” Tripp says. “As well as mass media history, as it deals with free expression that was limited because of race, creed or gender.”