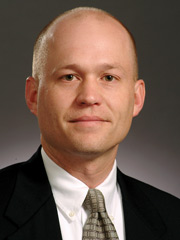 Environmental engineer Tim Townsend is helping to design the next generation of landfills.

Townsend is managing several massive outdoor experiments designed to test a new approach that could significantly extend the lifespan of the nation’s overburdened landfills and reduce their potential for pollution.

Since 2003, a 13-acre garbage mound at the New River Regional Landfill in North Florida has been operating as a huge “bioreactor.” By pumping liquid into the garbage, researches are promoting a decay process that is being closely monitored with an elaborate and extensive array of sensors and computer equipment. The experiment aims to speed up the breakdown of the garbage dramatically, creating space for more waste and reducing the threat of contamination of groundwater.

Today’s standard practice is to place garbage in landfills isolated from the ground by heavy-duty plastic liners. These liners are intended to intercept toxic leachate – the liquid that develops as rain percolates through the waste – from reaching groundwater. When a section of the landfill is full, workers bury the garbage in dirt to impede vermin and odors. Cut off from air and a consistent source of water that soaks all the waste, the garbage often remains preserved for decades – even centuries. By the time the garbage finally decays, the liner may no longer hold, allowing leachate to reach and impact groundwater, says Townsend, an associate professor of environmental engineering.

By infusing the trash with leachate, water and air, the bioreactor will spur proliferation of the natural bacteria that breaks down garbage, forcing it to decompose in the first few years when the liner is in the best condition, Townsend says.

Another big issue with current landfill technology is that until it decays, garbage remains bulky, filling space that could otherwise be used for more waste, Townsend says. That’s important because new landfills are notoriously difficult to build because of opposition from residents.

By breaking down garbage quickly, the bioreactor landfill could reduce the volume of waste in landfills significantly, making room for more.