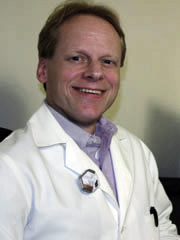 Maurice Swanson has been described as, “a serious scientist who is not afraid to go where the scientific trail of investigation leads him.”
Luckily, the scientific trail led the professor of molecular genetics and microbiology to UF’s College of Medicine and the UF Genetics Institute.
Swanson and his students found that the root of the most common type of adult-onset muscular dystrophy appears to be a form of genetic stuttering that blocks the action of key proteins in cells. Their research was published in Science magazine.
The discovery helped answer a question that has long mystified researchers who study myotonic dystrophy: How can one gene mutation found in certain people with the disorder essentially cause the same cluster of symptoms found in others who have the disease-but who feature an entirely different gene mutation?
“These two genes encode proteins that do completely different things,” Swanson says. “The puzzle was that patients who have myotonic dystrophy show very similar clinical features yet have affected genes that function in different biochemical pathways.”
The inherited disorder, found in one of every 8,000 people, causes skeletal muscles to lose the ability to relax once they contract. The muscles progressively weaken and eventually waste away.
Swanson continues to study muscular dystrophy, as well as pursue the hypothesis that muscleblind gene therapy might be an effective treatment for myotonic dystrophy.
“My favorite part of research is the intellectual challenge that results when your experimental results drive you into a new field of study,” Swanson says.