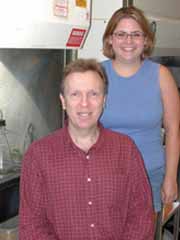 Professor of Physiology and Functional Genomics

Colin Sumners works to understand the cellular and molecular effects of a small protein in the brain, but his very focused research may have large implications for understanding conditions such as hypertension and strokes.

Specifically, he has concentrated on the small protein angiotensin II, which has diverse actions within the brain.

On the other hand, angiotensin II acts on a different set of receptor proteins to contribute to brain cell death that occurs following a stroke.

Sumners and his colleagues have performed groundbreaking work in defining many of the signal transduction molecules that are responsible for short-and long-term effects of angiotensin II on brain cells, and have identified problems with these mechanisms that likely contribute to hypertension and cell death.

Sumners’ work has been continuously supported through grants from the National Institutes of Health and the American Heart Association since 1984. In 1992, he won the Jacob Javits Neuroscience Investigator Award — a seven-year research grant — from the NIH’s National Institute of Neurological Disorders and Stroke, and in 1997 he received the Teacher/Scholar Award from the University of Florida.