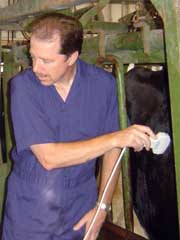 Repetitive calving is considered an excellent strategy to maximize milk production over a dairy cow’s lifetime. However, one of the greatest challenges facing the dairy industry is how to most efficiently return cows to the pregnant state soon after delivery of a calf.

Charles R. Staples, an internationally recognized ruminant nutritionist, has researched and identified dietary nutrients that play key roles in improving reproduction. Staples found that feeding supplemental omega-three fatty acids, such as those found in fish, have improved pregnancy rates. Also, feeding other fat sources such as soybean oil, that contain higher concentrations of the essential fatty acids linoleic and linolenic acids, have improved cows’ fertility. These improvements in pregnancy rates are thought to be due to more active ovaries, to a reduction in embryonic death and to an improvement in liver function.

“Utilizing dietary nutrients to coordinate tissues and organs to set up for conception and embryo survival has been the most exciting aspect of my work,” Staples says.

Besides obtaining more than $550,000 in funding during the last five years, Staples is regarded nationally and internationally as a speaker and consultant in the field of dairy nutrition. Based upon his work of using dietary nutrients to improve reproduction in dairy cows, Staples was honored in 1998 by the American Dairy Science Association with the Nutritional Professionals Applied Nutrition Award.