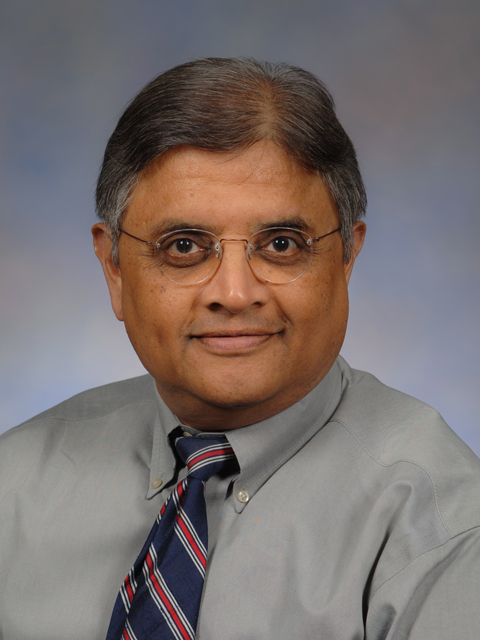 Arun Srivastava’s research is in the areas of parvovirus molecular biology and the use of parvovirus-based vectors in human gene therapy.

Parvovirus infections are very common in humans, and parvoviruses are among the smallest of the known viruses. As a result, they are much more amenable to a variety of genetic manipulations in the laboratory. For over three decades, Srivastava has explored various aspects of the molecular biology of human parvoviruses, as well as their clinical correlates.

Srivastava’s research has focused on the non-pathogenic human parvovirus, the adeno-associated virus (AAV), and a common human pathogen, the parvovirus B19. His laboratory has made seminal contributions to the field of parvoviruses, which include: identification of cellular co-receptors for AAV, as well as parvovirus B19; elucidation of various steps involved in parvovirus trafficking in the cell and nuclear transport; identification of cellular proteins involved in the regulation of AAV DNA replication and encapsidation; development of recombinant AAV and parvovirus B19 vectors; and the use of parvovirus vectors for gene transfer and gene therapy. Parvovirus-based vectors have gained attention as a useful alternative for human gene therapy.

The stable integration of the AAV genome, and the erythroid cell tropism of B19, have been exploited in his laboratory to construct the following two types of AAV-B19 hybrid vectors. Type I vectors allow stable integration of the viral DNA in infected cells, but the viral gene expression occurs predominantly in the erythroid progenitor cells. Type II vectors allow efficient erythroid progenitor cell-specific gene delivery, as well as expression of transduced genes. More recently, the Srivastava laboratory has developed the next generation of recombinant AAV vectors that transduce cells and tissues more efficiently at lower vector doses, and are less immunogenic. The current emphasis is on developing recombinant parvovirus vectors for gene therapy for genetic diseases, such as beta-thalassemia and sickle cell disease, and malignant disorders such as hepatoblastoma and hepatocellular carcinoma.

Srivastava’s research activities continue to be at the forefront of research on human parvoviruses and their further development as vectors in human gene therapy.