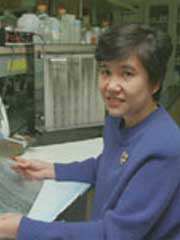 Rosalia Simmen studies pregnancy in large animal models (pigs and cows), but she gets special satisfaction from the impact her research could have on humans. “One aspect of my research that is particularly satisfying is the potential for significant contribution to women’s health, as well as large-animal production,” Simmen says. “The opportunity to contribute to research directions that are likely to lead to applications in the areas of human health and agriculture has been a quite challenging, but highly welcomed, responsibility.”

At the heart of Simmen’s research is understanding why some pregnancies succeed and others fail. Toward that end, her research has focused on the biological processes that occur during the critical early days of pregnancy, when the mother’s body must recognize that she is pregnant and prepare her uterus for the embryo. The latter has special significance for Simmen, who is a mother of two.

Simmen’s lab was the first to clone several uterine and embryo genes that can be used as markers to determine whether a pregnancy will be successful. She also has identified and examined novel functions for several enzymes and proteins that help determine pregnancy success.

Because of the cross-species implications, Simmen’s work has been supported by both the National Institutes of Health and the U.S. Department of Agriculture and has been cited in both human and animal journals. In addition, she sits on scientific review panels of both federal granting agencies.