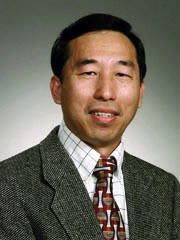 Chemical engineering Professor Fan Ren’s research focuses on the potential for gallium nitride, or GaN, as a chemical sensor and as the basis for next-generation semiconductors.

“Increasing regulations on the release of gases or other chemicals into the environment have focused attention on development of advanced sensors,” says Ren. “There is a strong interest in the development of GaN-based gas and liquid monitors.”

Ren’s research on the use of GaN semiconductor gas sensors for fuel leak detection in spacecraft is being funded by NASA. In addition, these detectors might also be used in automobiles and aircraft, fire detectors, exhaust diagnosis and emissions from industrial processes. GaN and SiC are capable of operating at much higher temperatures than more conventional semiconductors such as silicon.

Ren has averaged more than 30 journal publications and close to $1 million a year in funding since arriving at UF in 1999.

“What I find particularly impressive about Dr. Ren’s accomplishment is that he is also carrying a full teaching load that includes large undergraduate classes,” say chemical engineering department Chair Spyros Svoronos. “He is an outstanding teacher whose evaluations far surpass the departmental and college averages.”