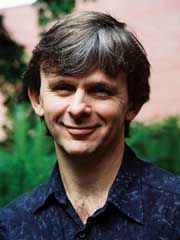 Reitze is the project manager for the design, assembly and installation of the input optics on the Laser Interferometer Gravitational-Wave Observatory, or LIGO, which seeks to detect and study gravitational waves. These waves, first predicted by Albert Einstein more than 70 years ago, have never been observed, despite a number of attempts over the last 30 years.

The LIGO detector consists of separate laser interferometers in Washington State and Louisiana. These interferometers, essentially very sensitive laser rangefinders, make extremely precise measurements of the distance between test masses located 2.5 miles apart. If the test masses are subjected to a gravitational wave, their positions will change and LIGO will detect it.

There are many sources of gravitational waves in our universe, including collisions of neutron stars, collisions of black holes, supernova events and relic waves from the birth of the universe in the Big Bang. The LIGO detector will have the sensitivity to observe these events not only in our own galaxy but also in many of our neighboring galaxies, thus opening an absolutely unique window into these phenomena.

Reitze’s second area of interest, femtosecond spectroscopy, uses short-pulse lasers to probe and manipulate physical systems on femtosecond time scales, or a millionth of a billionth of a second.

“Through technological advances in lasers and pulse-sculpting technologies, it is now possible to guide the quantum mechanical motion of an atom, molecule or solid much in the same way a computer guides the motion of an airplane,” Reitze says.

In the area of bioimaging, Reitze is working with UF neurosurgeons to apply laser technology to medical imaging. His group was the first to demonstrate the use of optical coherence tomography (OCT) for high-resolution brain imaging. The group is exploring the use of OCT for dental, throat and eye imaging.