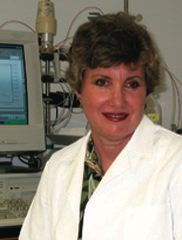 Ann Progulske-Fox’s research primarily focuses on the bacteria that are associated with periodontal disease, one of the most common infectious diseases worldwide. She has found that since it has an association with cardiovascular disease, the prevention and treatment of periodontal disease may have a significant impact on human health.

“Through the years, Ann has had a consistently vigorous research program,” says Dr. Kenneth Anusavice, associate dean for research in the College of Dentistry. “She is also an active collaborator with investigators throughout UF and at other premier institutions.”

Several years ago, Progulske-Fox and her students were the first to report that specific periodontal bacteria were able to invade human cells that line the coronary arteries. Recently, using state-of-the-art technology, they have more completely defined how the bacteria are able to do this. This past year, they were also the first to report the actual isolation of these bacteria from human atherosclerotic plaques, which are the actual site of the hardening of the arteries.

As a result of these and other research projects ongoing in Progulske-Fox’s laboratory, a number of patents have been issued or are pending during the past few years.

Another one of Progulske-Fox’s studies uses an innovative technology invented by her and two other UF faculty members to identify previously unknown genes of bacterial pathogens that allow the bacteria to cause disease. She is applying this technology to the study of the periodontal bacteria with the goal of developing a vaccine for the disease. Laboratories around the world have also started applying this technology to better understand the particular diseases and for the development of vaccines and compounds.