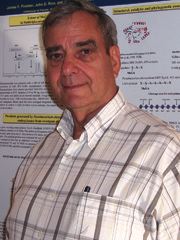 Professor of Microbiology and Cell Sciences

The negative impacts of fossil fuels on the economy, environment, and national security of the United States has drawn scientists from many institutions, including the University of Florida, into research efforts to convert renewable energy resources to alternative fuels.

James Preston, a UF professor of microbiology and cell science, studies bacterial enzymes, that might be used to convert biomass into ethanol for alternative fuels and biology-based products. He is interested in developing enzymes for processing the material found in plant walls of wood and crop residues to release fermentable sugars.

“In collaboration with faculty in the department, this research is directed at the development of bacteria for conversion of biomass to ethanol,” says Preston, who has been at UF since 1969, when the microbiology department was called “bacteriology.”

Using technologies in bacterial genomics, structural biology and metabolic engineering, the efforts, supported by the Consortium for Plant Biotechnology Research and the U.S. Department of Energy, have contributed to successful production of alternative fuels and bioplastics.

“Thanks to his work and that of other faculty in the department, many plant waste products will one day be converted to ethanol in an economical fashion,” says department Chair, Eric Triplett.

Preston is also interested in the roles of carbohydrates in the recognition and attachment of bacteria to plant and animal surfaces.

“One goal of these efforts is to develop the biocontrol potential of the naturally occurring bacterium, Pasteuria penetrans, as a benign alternative to chemicals used to control plant-parasitic nematodes,” he says.

“Given that the application of methyl bromide, the most effective chemical for the control of disease-causing nematodes, has been banned, Pasteuria penetrans shows great promise for the control of these nematodes. Collaborative efforts of Professor Preston and faculty in entomology and nematology are integrating basic and applied research to solve a major problem facing Florida agriculture “ Triplett says.