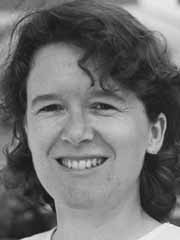 In the field of religious studies Anna Peterson has attained national prominence through her work in Latin America. Her 1997 book Martyrdom and the Politics of Religion is currently used as a model for studying the way religious communities interpret and live out ideals in Latin America.

Peterson has helped to bring other scholars working on Christianity and globalization in the Americas to UF’s Center for Latin American Studies through a Rockefeller Residential Humanities Fellowship.

Her recent book, Being Human: Ethics, Environment, and Our Place in the World, establishes her other major research area in social and environmental ethics. Here she explores the interrelations between ethnographic and historical approaches that illuminate the way ethical systems are intertwined with larger worldviews and ways of life.

She is presently working on a new project, Residence on Earth, which explores the environmental values articulated and practiced by religious communities in Central America and in the Midwest United States.

Peterson has already demonstrated her ability to combine social scientific work, theology and philosophical resources with ethnographic fieldwork. Her goal is to “unite her concerns with the ways religious communities articulate and live out ethical ideas and the ways those ideas in turn interact with concrete social and historical conditions.”