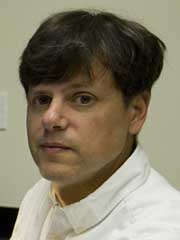 Traditionally, the stuff that was left over after wood and paper production was considered waste. But because of researchers like Gary Peter, these plant by-products have a new name – energy.

Peter’s research is based in forest biotechnology and plant genetics. Since he arrived at UF in 2002, he has been exploring the best ways to improve paper and pulp production, tree breeding and the quality of wood.

As an expert in plant biology, Peter understands his research subjects down to the last cell. Because of his knowledge, he has advised the U.S. forest industry on clonal forestry and how to genetically improve the southern pine. He was also the first scientist to publish information on the modification of wood for the paper and pulp industry using forest biotechnology, according to Tim White, the director of UF’s School of Forest Resources and Conservation.

“Gary’s contributions to his fields are well-recognized as evidenced not only by his publications in top journals in the field, but also by the fact that his opinions on wood properties, bioenergy and forest biotechnology in general are sought out by the global leaders in forest industry,” White said.

Due to the encompassing nature of Peter’s studies, he often collaborates with other researchers studying diverse areas of science. Recently, he organized a group of experts in neuroscience, chemistry, microbiology and cell science to investigate and overcome technological barriers in the conversion of lignocellulosic biomass – a complex of cellulose and lignin that functions as the “skeleton” of a plant – to energy-rich ethanol.

In the past five years, Peter’s research has been funded by the National Science Foundation, the Department of Energy and the United States Forest Service, among others, in grants worth more that $16 million.

Recently, Peter was chosen to serve in the Technical Work Group on Agriculture, Forestry and Waste Management, which was organized as part of Gov. Charlie Crist’s Action Team on Energy and Climate Change and the Florida Department of Environmental Protection.