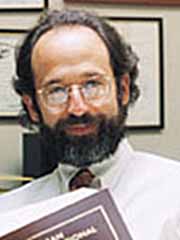 Juan Perea has become an influential voice in the American legal community on the subjects of language policy and history, discrimination law, and immigration and race relations.

Much of his current research focuses on the complexity of race relations in the United States, which have historically focused on blacks and white, with little attention paid to other ethnic minorities. Currently, he is completing a new textbook on the topic titled Race and Races: Cases and Resources for a Multiracial America, to be published next year by the prestigious West Publishing Company.

Specifically, Perea has explored why Latinos/as, a large and expanding segment of the U.S. population, still remain relatively powerless and invisible in the discourse about race and racism. He currently is researching another book, tentatively titled Latinos and the Struggle for Civil Rights, which will bring to light much unknown legal history regarding Mexican-Americans and other Latino groups.

Another area of interest for Perea is the national implications of the legislation passed in Florida granting compensation to the victims, and the descendants of the victims, of the Rosewood massacre, in which a white mob burned the predominantly black community of Rosewood, Fla., killed several of its residents and drove the rest from the area.

Perea has lectured on his work throughout the country. He also has testified regarding his research before the United States Senate and the U.S. Commission on Civil Rights.