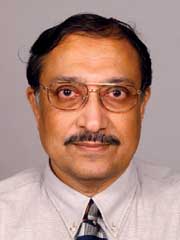 Jawarharlal Patel’s research seeks to improve the lives of people who suffer from various lung diseases by studying the multiple functions of Nitric Oxide (NO), a simple but remarkable gas molecule generated by lung cells.

“NO is called the ‘dual edged sword’ in biology because when generated in small amounts on a regular basis by cells in blood vessels of the lung, it’s beneficial for maintaining pulmonary vascular function,” Patel says. “However, when generated in large amounts during inflammation of the lung, NO can be toxic.”

In lung diseases like Adult Respiratory Distress Syndrome and Chronic Obstructive Lung Disease, the lungs’ ability to generate sufficient NO is diminished. To combat this, patients are given NO gas inhalation therapy to reduce pulmonary hypertension and replace the NO they cannot produce.

“The problem is when patients become dependent on NO therapy and fail completely to produce it from within,” Patel says.

Patel is trying to understand molecular mechanisms by which the lungs can maintain or improve NO production by researching multiple approaches including cell biology, biochemistry, molecular biology and gene therapy. His goal is to find a way to restore the NO synthase activity to maintain NO production and lung function.

Patel is also trying to understand why most lung transplants ultimately result in rejection.

“Most lung transplant patients do not survive on an average more than five years because their bodies almost always reject their new lungs, and no one knows why,” Patel says.

To find out, Patel and his team have developed a rat model of lung transplantation to understand the molecular mechanisms of donor lung rejection. They monitor biochemical and pathological changes to understand the early events that trigger rejection of the donor lung.

“If we find critical early markers of rejection, we can most likely correct them by gene therapy or by development of therapeutic treatment,” Patel says.