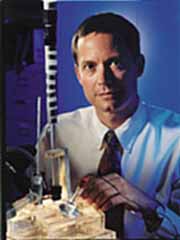 Research that Mark Orazem and his colleagues began several years ago to prevent parts of the Trans-Alaska pipeline from corroding has opened up new horizons for using electrochemical engineering principles in applications as diverse as transdermal drug delivery and concrete curing.

Orazem says theories developed decades ago to design systems to protect the bare pipe that used to carry oil and gas around the world were insufficient to design systems to protect modern pipe, which has a protective coating. Orazem’s group found that use of the old theories yielded adequate protection if pipeline coatings fail uniformly, but failed to provide sufficient protection if the damage to the coating was localized. Large-sized defect areas in the coating may be created during shipment of the pipe to the installation site, lifting of the pipe into the ditch and backfill operations.

“Strategies based on the assumption that coatings fail uniformly were not even sufficient to protect the pipe from a coating failure the size of my thumbnail,” Orazem says.

Using computer models developed in his group and actual experiments on damaged segments of the 4-foot-diameter Trans-Alaska pipeline, Orazem and his colleagues were able to ask “What if …” questions about how and where the coating might fail and about what kind of system would protect the pipeline at those failures. Orazem’s original effort in this area was incorporated into the corrosion prevention strategy used for the Trans-Alaska pipeline. The success of that work led to current research oriented toward problems more typical of the lower 48 states such as protection of multiple pipelines in a right-of-way.

Software Orazem has developed as part of a long-term collaboration with Oscar Crisalle at the University of Florida, Luis García-Rubio at the University of South Florida and Claude Deslouis and Bernard Tribollet at the Centre National de la Recherche Scientifique in Paris to interpret a broad class of spectroscopic measurements is being used to obtain a fundamental understanding of corrosion problems in such things as drinking water networks, copper alloys used on naval vessels and aerosol containers for personal-care products.