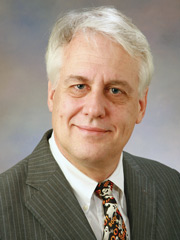 Pediatric gastroenterologist Donald Novak seeks to better understand whether fetal nutrition plays a role in the origin of certain diseases that surface in adulthood.

As alarm rises over soaring rates of obesity, diabetes and high blood pressure, scientists are eager to determine whether nature or nurture – or some combination – spurs development of these conditions.

“There are many people around the world who don’t have enough protein in their diets, and malnutrition is a major cause of babies being born small around the world,” says Novak, a professor with the division of pediatric gastroenterology at UF’s College of Medicine. “There is a lot of evidence that when infants are born small, compared to their counterparts, they have a higher risk of these specific disorders.”

One possible answer: What mothers eat when they are pregnant could alter the function of key genes in their offspring, even without changing the genes’ fundamental DNA sequence.

Novak and his colleagues have found from ongoing animal studies that a high-protein maternal diet predisposes offspring to health problems such as insulin resistance in adulthood, a precursor to diabetes. Other findings show that protein deprivation during pregnancy also is linked to the development of larger body type in rats – a tendency that persisted for two generations.

The work of UF researchers and others also raises questions about standard care of premature babies and newborns whose growth in the womb was retarded. The suggested protein intake for these infants is relatively high, to help spur “catch-up” growth. In addition, babies who are fed formula tend to take in higher protein levels than those who are fed breast milk.

Metabolic syndrome is a major public health problem characterized by a combination of abdominal obesity, high blood pressure and insulin resistance. Novak and his colleagues are looking at how maternal diet might alter gene function and influence the transmission of disease to subsequent generations.

“Genes are tightly wound around proteins; if those proteins are altered in certain ways, it’s more difficult for the gene to be active or for new proteins to be made from the gene,” Novak says.