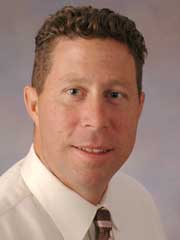 Through his research on liver disease and the immune system, David Nelson has made great progress in protecting the way humans protect themselves.

Nelson’s study of the body’s immune response to hepatitis C has earned him international recognition. Over the past seven years, his research in liver function and the diseases that destroy the liver has resulted in more than $5 million in grant support.

The Liver Transplant Program at the University of Florida, of which Nelson is the medical director, is one of the 10 largest liver transplant programs in the nation. Nelson is also a founding member of the Viral Hepatitis Council in Florida, which serves to advise the state on the management of hepatitis.

According to Department of Medicine Chair Edward R. Block, “Nelson is an example of a ’triple threat,’ a faculty member who excels in the three primary missions of an academic physician, namely, teaching, patient care, and research.”

Far from confining himself to the world of academic research, Nelson prides himself on translating his work into hands-on patient care as a hepatologist. Nelson is currently involved in 15 clinical trials involve the study of several liver diseases, including viral hepatitis, cholestatic liver disease, transplantation and hepatocellular carcinoma, all with the aim of improving patients’ lives.

In the pharmaceutical world, Nelson has paired with Roche and Human Genome Sciences as the lead investigator for two new compounds to combat hepatitis C. His study of liver transplantation in hepatitis C patients could minimize recurrences of hepatitis C in transplant patients. His group has already defined the factors that cause recurrence of the disease and continues to find better ways to improve the outcomes of transplant patients.

Nelson currently serves on the editorial board of three medical journals and is Associate Editor for the leading liver journal, Hepatology. Of the 40 papers Nelson has published since 2001, many have emerged as original and influential texts in the fields of hepatology and transplantation.

Through his teaching, research and clinical care, Nelson’s discoveries have opened new doors internationally in the study of human immunity and liver disease.