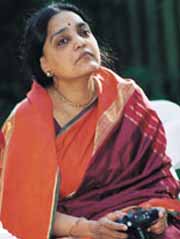 Described by a colleague at Columbia University as “this nation’s premier interpreter of the Hindu tradition,” Vasudha Narayanan’s research ranges from translating ninth-century Indian poetry to “monastery hopping” around the United States exploring the Hindu tradition in America.

Narayanan calls the ninth-century Tamil poem Tiruvaymoli, which she is translating for Harvard University Press, of seminal importance in the Hindu tradition because it is the first such work written in a vernacular that was accessible to commoners.

A prestigious John Simon Guggenheim Foundation fellowship supported Narayanan’s research into how Tiruvaymoli and other Tamil works are interpreted differently by men and women. Her findings have led to more balanced and gender-inclusive courses on Hinduism across the nation.

Narayanan’s research for this translation also led her to explore the harmonious co-existence of Hindus and Muslims in southern India. “My research explores the patterns of adaptation and enrichment that emerge when two religions share the same language and geographic area, and intersecting cultural spaces.” The National Endowment for the Humanities has awarded her a one-year fellowship to continue this research.

Narayanan also is working on a book titled The Hindu Traditions in America: Temple Space, Domestic Space, and Cyberspace, which will be published by Columbia University Press. Narayanan says invited lectures have allowed her to “monastery hop,” visiting many of the more than 350 Hindu temples and religious institutions that have been built in the United States in the last 20 years. The book examines Hinduism in the changing religious landscape of the United States, assessing what is retained in the transition from India, what is transformed and what is jettisoned.

One reviewer said this book “… will radically change the way we teach all kinds of classes, from the history of early India to modern Hinduism to Asian-American religions in the United States to American religion. Publish it quickly … it is badly needed.”