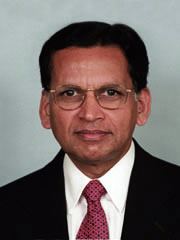 When P.K. Nair arrived in Gainesville in 1987, he noticed that UF lacked a program in his specialty of agroforestry. Nair, a pioneer and professor of agroforestry, quickly solved the problem by putting together an interdisciplinary program within the School of Resources and Conservation.
Agroforestry is a relatively new approach to land management that addresses problems caused by traditional agriculture and forestry production systems. Agroforestry practices in North America include windbreaks, riparian forest buffers, alley cropping, silvopasture and forest farming in sustainable agricultural systems.
“Our work has had significant impact in enhancing the productivity and sustainability of smallholder farming systems in the tropics,” Nair says.
Nair’s research also impacts developing countries in Africa, Asia and Latin America, where he helps farmers overcome land management obstacles like poor soil fertility, low productive capacity of soils and high cost of fertilizers.
“Because of his work, developing countries no longer need make the difficult choice between growing food or growing fiber,” says Ann Camp, chair of the Society of American Foresters Science and Technology Board. “With agroforestry, both can be accomplished on the same piece of ground.”
Nair says many of the systems he tackles contain only one cultivated species in a field at a time, like corn fields, soybean fields, pine tree stands
“We are making basic household needs such as food, fodder for animals, and fuelwood available by growing them on the same unit of land at the same time in an integrated manner,” Nair says.