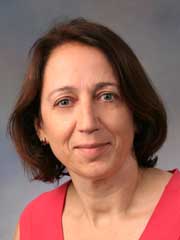 As a world leader in autoimmunity research, Laurence M. Morel has turned mouse DNA into her own intellectual stomping ground. Her study of systemic lupus erythmatosus in mice has defined her as “the world’s leading expert in murine autoimmune disease,” according to James M. Crawford, chair of the Department of Pathology, Immunology and Laboratory Medicine.

Morel has made great strides in the study of lupus, an autoimmune disease in which the immune system creates antibodies that attack the body’s own cells, tissues and organs. In an attempt to understand why a body would turn on itself in this way, Morel has researched lupus in mice by genetically breaking the disease apart, studying its components and then putting it back together. She was the first to isolate the genetic variables that demonstrated the polygenetic basis of the disease in mice.

“Laurence’s brilliance has been to study the complex autoimmune disease of SLE [systemic lupus erythmatosis] by breaking it down genetically and hence into component phenotypes, then recombining components genetically to reproduce the complete disease,” Crawford said.

Morel’s work is funded by the National Institutes of Health and has resulted in 58 publications, 11 reviews and two book chapters. In the past five years alone, Morel has published 33 articles, written seven reviews and accumulated more than $9 million in funding. She serves on the editorial board of five scientific journals and has reviewed publications for a total of 21 journals.

Morel is a key player at national and international lupus meetings, where she is respected for her groundbreaking work in immunology and the genetics of lupus. She has taught courses on mouse genetics, cell development, biomedical research and a pathology course for medical students. In the past five years, she has mentored students ranging from high school to post-doctoral. She is also the Director of Experimental Pathology, in which she is partially responsible for faculty, resources and planning at UF’s College of Medicine.