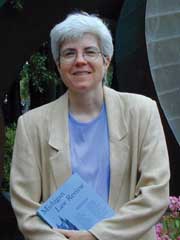 As a law professor who is also a former aircraft and munitions maintenance officer in the Air Force, Diane H. Mazur has a unique perspective on the United States military. Her work focuses on various aspects of civilian-military relations under U.S. law and examines military service and its relationship to constitutional interpretation, citizenship, political participation and ethics.

Currently, Mazur is focused on the constitutional consequences of the transition to an all-volunteer military.

“Until the 1970s, a draft ensured that a range of citizens, privileged and non-privileged, liberal and conservative, would serve in military. Now, the military draws its members from an increasingly narrow and self-selective cross section of the population. As a result, the military has become progressively more distant from the civilian society it protects,” Mazur says.

She says that a national service obligation would make the military stronger by enhancing civilian-military relations under the Constitution. Mazur, who is busy analyzing recent congressional proposals to re-institute a military draft, says the military’s assumption that volunteers are more qualified than draftees is flawed.

“Under the Constitution of the United States, it’s very important that the military be representative of the people it protects.”

Since joining the UF faculty in 1994, Mazur has authored 10 articles and reviews, which have been published in the Ohio State Law Journal, U.C. Davis Law Review, Michigan Law Review and Notre Dame Law Review.