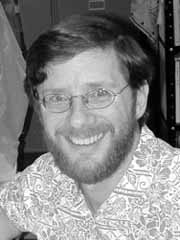 Steven Manchester studies the history of plants to shed light on the mysteries surrounding Earth’s development. A plant’s history – where it grew and how it evolved – can reveal much about the prehistoric climate of Earth, along with the migration patterns and habits of ancient animals.

Manchester recently tracked the history of numerous extant and fossil conifers and flowering plants throughout the Northern Hemisphere. He included a new “student-friendly” approach to his work by incorporating both graphic presentations and careful documentation of the earliest known occurrences of selected plants.

Among the most prolific authors at the Florida Museum of Natural History, Manchester has made significant contributions to its research over the past five years. He has published more than 50 articles in leading peer-reviewed journals in his field, given presentations at symposia and collaborated with other scientists in the United States and abroad to address questions concerning the distribution patterns of plants.

William F. Keegan, chair and associate director of research and collections in the Department of Natural History, says Manchester’s work “is making major contributions to our understanding of the evolution and systematics of plants.”

Over the next five years, Manchester plans to continue his comparative study of Middle Eocene flora of North America, Europe and Asia to better understand the routes and timing of migration in the Northern Hemisphere. During the Middle Eocene period, many plants now only found in Southeast Asia were also established in Europe and North America. Manchester plans to focus specifically on fossil and living plants of China and Russia to determine when they arrived in Asia. His future goals include a thorough investigation, aided by students and colleagues, into the world’s intercontinental land-bridge regions, starting points for the migration of many species of flora.