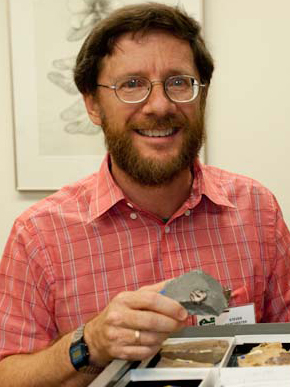 Steven Manchester studies fossil fruits from plants that populated the northern hemisphere during globally warm climates 40 to 60 million years ago. Some of these plants are now extinct, while others belong to genera that are still living today.

The fossils, combined with morphological and molecular data bearing on relationships among living representatives, have contributed to recent collaborative articles by Manchester and colleagues on the diversification of flowering plants, and the former widespread distribution of many types of plants now confined to eastern Asia.

His research also has greatly improved our knowledge of the evolution of particular plant families and genera, including the walnuts, dogwoods, oaks, and nutmegs. Manchester’s recent discovery of fossil cashew nuts from 47-million-year-old sediments of Messel, Germany indicates that cashew trees, now native only to tropical America, were present in Europe during the warm-climate interval of the Eocene epoch, and indicates that these plants likely spread across the former North Atlantic land connection between North America, Greenland, and Europe.

In collaboration with Drs. Jun Wen (Smithsonian) and Jean Gerrath (University of Northern Iowa), Manchester is currently conducting National Science Foundation-sponsored research entitled “Evolution via the grape vine – phylogeny and biogeographic history of the Vitaceae.” The distinctive seeds of grapes and their relatives provide important morphological characters for the discrimination of modern genera that are also well defined by molecular characters. Hence, the fossil grape seeds, now under study by Manchester and Ph.D. student Judy Chen, provide crucial information about the biogeographic and evolutionary history of this widespread and economically important family.