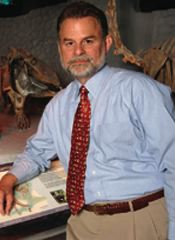 Professor and Curator of Vertebrate Paleontology

The old gray mare, she ain’t what she used to be.

Bruce MacFadden, UF paleontologist and curator of vertebrate paleontology in the Florida Museum of Natural History, has found that the evolution of horses and other fossil mammals from the new world had more twists and turns than previously thought.

“The old ideas about how horses evolved made for a fairly simple and tidy story,” says MacFadden, whose 1992 book Fossil Horses is considered the definitive work on the subject. “But many of the concepts about horse evolution that came into being during the 20th century are now outmoded, giving way to an understanding of the fossil horse sequence that is much more complex.”

According to conventional notions, horses simply became bigger over time and switched from being diminutive shrub nibblers to the statuesque, grass-eating masters of the open plains, says MacFadden. But the new horse sense is that the equine mammals are adaptable critters whose size, diet and range depended on geography and climate.

“Bruce was one of the first paleontologists to uses stable isotopes, which has positioned him at the cutting edge of his discipline,” says Scott Robinson, chair of the Department of Natural History.

MacFadden analyzed the chemistry of fossilized teeth to determine horse diets. Animals incorporate into their skeletons and teeth the carbon content of the plants they eat, he said, and grasses photosynthesize carbon differently than do leaves, shrubs or trees.

“Bruce MacFadden’s perspective on horse evolution elegantly summarizes the latest information on their fossil record, and the knowledge that continues to arise from a wide variety of analyses of both new discoveries and existing fossils,” says John Flynn, curator of fossil mammals at the American Museum of Natural History. “And there’s no one better than Dr. MacFadden to provide this synthesis, since Bruce has long been a world leader in understanding horses, past and present.”