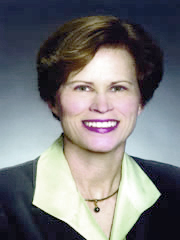 Heart disease in women has long been pushed to the back burner of medical research.
But women’s heart disease is now a growing area of research for many doctors, including Marian Limacher, a principal investigator for the UF Clinical Center for the Women’s Health Initiative (WHI).
“Women, on average, are older and are more likely to have other contributing conditions like diabetes and high blood pressure at the time of their first heart attack,” Limacher says.
In the past, scientists thought higher levels of estrogen in pre-menopausal women helped prevent heart disease and that taking estrogens after menopause may reduce the risk associated with aging.
“We found that estrogen with progestin actually raised the risk of cardiac problems for women during the first year of medications, but over time was not different than placebo,” Limacher says.
Estrogen plus progestin also raised the risk of breast cancer, but for estrogen alone, the risk of cardiac events was the same for women on active hormone or on placebo (while strokes were increased).
WHI will follow women in the study for five years to see the longer-term effects of the medications.
“The most exciting part of my current position is the opportunity to participate in major research activities that will influence the clinical practice of medicine,” Limacher says.
“Interacting with eager, bright students and trainees is also a highlight of my job.”