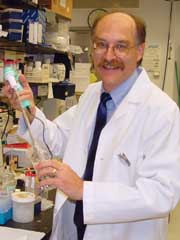 An estimated 60,000 to 100,000 people in the United States are affected by retinitis pigmentosa, an inherited form of blindness that occurs when a mutated gene is passed down from either a mother or father to a child. There are usually no symptoms until late in childhood or early teens when children start to lose their peripheral vision.

“Kids may bump into people or get hit by balls and experience night blindness, and they don’t know why,” says Alfred Lewin, who is determined to find an answer for inherited dominant diseases like retinitis pigmentosa.

Every year, one in 3,500 people goes blind from the disease, caused by death of the light-harvesting cells in the retina. Eventually, retinitis pigmentosa leads to tunnel vision and then, in anywhere from 10 to 40 years, blindness.

By modifying the level of RNA, what Lewin calls “the sexier version of DNA,” between the gene and protein, Lewin is trying to find treatments for the disease. Lewin and his team have developed treatments that work in animals and hope to start clinical trials in humans.