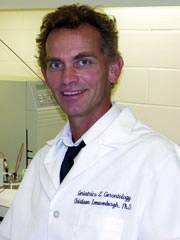 Associate Professor of Biochemistry of Aging

Christiaan Leeuwenburgh is trying to stop free radicals from leaking and making us age.
As an international researcher in the mechanisms of aging, Leeuwenburgh tackles aging from a scientific standpoint.
“I’m very curious to see if the free radical theory of aging is the main cause of aging,” Leeuwenburgh says.
The free radical theory assumes that aging occurs when free radicals leak from mitochondria; Leeuwenburgh’s research tries to identify and prevent the leaking.
“I think it’s going to be very difficult to prevent aging, but maybe some day, many years from now, we can benefit from this research,” he says.
Leeuwenburgh’s studies test the success of interventions like calorie restriction, specific dietary interventions and life-long exercise that could lessen cellular dysfunction and improve quality of life during old age.
Past research in rodents and short-term clinical trials in humans, has found that the biggest factor in preventing aging is limiting caloric intake.
“As long as you get the right amount of fats, proteins and basic nutrients, eating less food, or fewer calories, will certainly extend average lifespan and prevent disease,” Leeuwenburgh says.