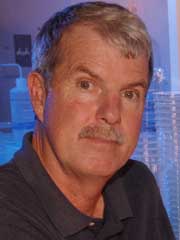 Jeffrey Jones knows tomatoes and peppers. More importantly, he knows the ecology, history and variations of the bacterial spots that infect these plants, resulting in rot, wilted leaves and less fruitful plants. After years of research, he also knows how to counteract the bacteria.

Jones has focused on bacterial spots within the genus Xanthomonas, a common plant pathogen, specifically within tomatoes and peppers. Jones and his collaborators have identified four distinct genetic groups of Xanthomonas in the strains of bacterial spots they have discovered on tomato and pepper plants. They then renamed three of their discoveries as new species to show their genetic diversity.

Far from merely analyzing the bacteria, Jones has developed several methods for identification, restriction and prevention of disease.

Jones’ research starts at the seed. He has contributed to strategies that detect bacteria within the DNA of the seeds and plant tissues. He has also developed a procedure called magnetic immunoisolation, that targets and separates the bacteria from its surroundings using paramagnetic beads and antibodies.

Jones’s work with bacteriophages, or viruses that attack bacteria, to treat disease was so successful that it is now used to control spot bacteria on tomatoes. Jones also discovered that viruses work significantly better to control bacteria than the standard copper bactericide, which reduces bacteria but doesn’t destroy them entirely.

According to Raghavan Charudattan, chair of the plant pathology department, Jones’ research has identified him as “an internationally recognized expert in bacterial plant pathogens who is much sought after by regional, national and international institutions for research collaboration and consultations.”