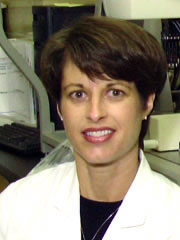 Professor of Pharmaceutics and Medicine

Julie Johnson, a professor of pharmacy and cardiology, researches pharmacogenomics-the study of how people’s genes plays into their responses to certain drugs.
“The goal of pharmacogenomics is that a person’s drug therapy could be individualized, based on genetic information,” Johnson says.
This would increase the chance that the drug would work without causing serious toxicity.
“We’re currently collecting exciting early data that will attempt to predict the response to a group of drugs called beta blockers, and we’re continuing to build upon that,” Johnson says.
Johnson, the director of the UF Center for Pharmacogenomics, says the center gives researchers the opportunity to expand pharmacogenomic research within the university and outside the state.
“It’s great to be able to bring investigators from other parts of the country to share their research with us,” she says.