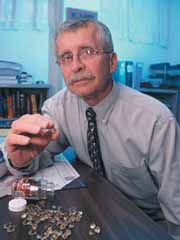 Jim Jessup studies the effects of exercise on biological declines associated with aging.

“Many of the physical declines and diseases that are typically believed to accompany aging are not due to aging per se, but rather are due to the lack of physical activity associated with a sedentary life style.”

“Our research has shown that even a modest exercise program can make significant improvements in many of these conditions,” Jessup says.

Jessup has participated in numerous clinical trials that examined the effects of various types of exercise on kidney function, blood pressure, body composition and balance in men and women in their seventh, eighth and even ninth decades.

Through a two-year grant from the National Institute of Nursing Research (NINR), Jessup is currently trying to determine whether moderate-intensity aerobic exercise and daily vitamin E supplements can reduce free radical-induced damage in men and women 70-85 years of age. Free oxygen radicals have been implicated in more than 200 human conditions, including many diseases associated with aging.

In an ongoing pilot study sponsored by the College of Nursing’s Biobehavioral Research Center with funding from NINR, Jessup and a number of colleagues are examining whether strength-training exercises, along with walking and stair climbing while wearing weighted vests, can improve bone density and balance in postmenopausal women. Falls resulting in fractures of bones weakened by osteoporosis are a major health problem for older women.

“Our exercise intervention may offer women an alternative to medications for protecting their bones as they age,” Jessup explains.