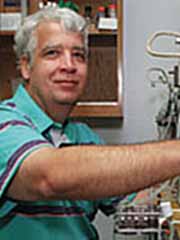 Lonnie Ingram has spent much of his distinguished career trying to make the world less dependent on fossil fuels. During the past decade, Ingram has become one of the most highly regarded and prolific researchers in the field of ethanol development. “The development of technology for the cost-effective conversion of modern, renewable biomass into a clean-burning automotive fuel has the potential to free the United States and other nations from oil-dependence and to allow a redistribution of wealth based on productivity and ingenuity rather than natural resources,” Ingram says.

Ingram’s work toward that end led to the U.S. Patent and Trademark Office granting him the nation’s historic five-millionth patent for a genetically engineered form of the E. coli microbe that allows an efficient conversion of plant material into ethanol. “There are few individuals who can claim to have laid the foundation for an entire industry through basic research,” writes one colleague. “Dr. Ingram can justifiably make such a claim. His pioneering work to develop genetically engineered microbes which can ferment in high yield all the sugars in plant material is an essential portion of the embryonic biomass conversion industry.”