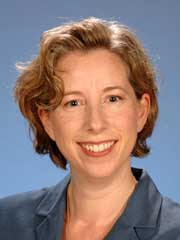 Melissa Hyde has made a career out of understanding the gendering of aesthetic culture in the 18th century. Hyde’s book, Making Up the Rococo: Francois Boucher and His Critics, studies the cultural politics of Enlightenment art criticism through the work of Boucher. It offers an account of how Boucher’s Rococo painting became identified with women and femininity in the 18th century; and it looks at how critiques of this art were related to social criticism. The book was nominated for the Charles Rufus Morey Book Award by the College Art Association.

Hyde has published numerous articles on women as artists and patrons in the 18th century, and is consulting curator for a major exhibition on women artists that will open at the National Gallery of Women in the Arts in Washington D.C. in 2010. Her research has been funded by fellowships from the Getty Research Institute and the Association of American University Women.

In addition to Making Up the Rococo, Hyde has edited and contributed to two volumes of collected essays. Women, Art and the Politics of Identity in Eighteenth-Century Europe, examines the often-overlooked role of women in the art world of the 18th century. Rethinking Boucher offers new readings of Boucher’s work that reveal the unexpected complexities of his art and its engagements with the Enlightenment. Hyde’s current book project focuses on 18th century women artists and their self-representations.

Hyde has lectured at the Louvre, Versailles and the National Gallery of London. In 2005, her international recognition won her the College of Fine Arts International Educator Award. Her essays have been collected and will accompany museum exhibitions in New York City, Sweden and Versailles.

Hyde is also the director of graduate studies in art history. Anna Calluori Holcombe, director of the School of Art and Art History at UF, said she has “come to depend on [Hyde’s] expertise and input.”

“Dr. Hyde is undeniably an ambassador of the University of Florida’s School of Art and Art History. She gives us due credit and serves us proudly as she speaks, writes and teaches about her area of specialty on an international stage,” Holcombe said.