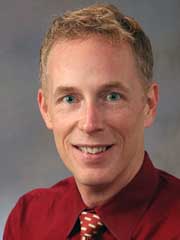 Growing old is hard enough; but with Jeffrey Hughes’ novel research, people with neurodegenerative diseases such as Alzheimer’s and Parkinson’s may be able to remember more and worry less about their golden years.

Hughes’s lab is currently devoted to Alzheimer’s and cancer research. Alzheimer’s is associated with plaque that builds up on brain cells. While some details about Alzheimer’s remain a mystery, it is believed that the plaque, which is primarily made up of a protein called beta amyloid, results in lost cells.

Finding a way to reduce this plaque is what Hughes refers to as the “holy grail” of Alzheimer’s treatment. But rather than use a drug to combat the protein build-up – Hughes is a professor of pharmaceutics, after all – his lab is exploring the power of gene therapy. Right now, Hughes and his colleagues are tracking a protein with a reputation for latching onto toxic compounds.

Hughes and his lab have already determined that this protein, known as gelsolin, reduces the plaques caused by beta amyloid. The next step is to determine whether plaque reduction will lead to a reduction in brain cell loss.

As a testimony to his duel research interests, Hughes is on the advisory board for both the American Society of Gene Therapy and the American Association of Pharmaceutical Scientists.

Hartmut Derendorf, chair of the pharm-aceutics department, says Hughes’ ability to combine genetics and pharmaceutical chemistry has made him a unique and indispensable part of the department.

“I have enjoyed watching Jeff mature as an academician over these past 14 years,” he said. “He has excelled in teaching and service to the university … I am sure he will continue to be a major asset for our department and the university.”