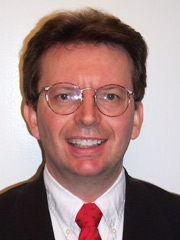 Geology Professor David Hodell is a paleoclimatologist whose research utilizes speleothems and sediment cores collected from lake and ocean bottoms to reconstruct past changes in Earth’s climate, oceans and environment.

“Our society is increasingly interested in the consequences of future climate and environmental change, as well as the role that humans play in these changes,” Hodell says. “Human civilizations throughout history have affected their environment through deforestation, agriculture, urbanization and industrialization. I am interested in how ancient civilizations affected their environment and, in turn, how environmental and climate change may have influenced cultural evolution.”

“One of the strongly held beliefs by Maya archaeologists was that climate in the region had remained relatively stable throughout the Holocene, and that major environmental perturbations were caused by human settlement and technology,” Hodell says. “My work has shown that the assumption of Holocene climatic stability in Mesoamerica is untenable. For example, lake sediment cores have provided strong physical evidence for protracted droughts during the 9th and 10th centuries A.D. that coincided with the collapse of Classic Maya civilization.”

Hodell’s current research, funded by the National Geographic Society, is focused on reconstructing climate change using stalagmites collected from caves on the Yucatan Peninsula to compare them to results derived previously from studies of lake sediment cores.

Hodell is also studying the impacts of the Maya on their environment.

“We recently demonstrated that early Maya inhabitants of the Yucatan Peninsula deforested the local landscape and caused dramatic increases in soil erosion,” he says.