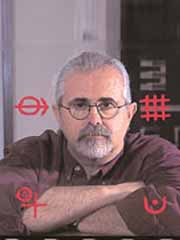 Richard Heipp, professor of painting in the School of Art and Art History, is active as an exhibiting artist as well as a public artist. His artwork incorporates large-scale, mixed-media installation projects which frequently involve scientific and art historical references that challenge notions of vision, belief and identity systems. His work employs elements of traditional painting and computer-aided fabrication and design, as well as sculptural and lighting components.

His artwork has been featured in more than 25 solo exhibitions and more than 80 group venues nationally. He has won 24 grants and awards including three Florida Individual Artist Fellowships and the prestigious National Endowment for the Arts-sponsored Southern Arts Federations Fellowship in painting. He has also been awarded 11 public art commissions, just recently completing a major project for the lobby of Gainesville’s City Hall.

A reviewer noted that Heipp’s artwork is unusually creative, original and inventive, and that with his work he “subverts some of the more dogmatic beliefs of modernism and post-modernism alike.” A critic writing about Heipp’s work for the Seattle Post-Intelligence, said: “Moving in close to the pieces the viewer can see the technique. Backing up the power of the image asserts itself. The work has substance to match its flashy style.” Others who have written about Heipp’s work frequently point not only to its social content but also to the transformative power of its manipulation and constructions.

Barbara Jo Revelle, director of the School of Art and Art History, says, “Richard Heipp is clearly making a significant contribution to the discourse surrounding art, image appropriation and the semiotics of seeing. In short, the work is seductively beautiful, and whether or not you understand his complex and exquisite pieces, you are apt to look at them long and hard for their sheer aesthetic presence in the world.”