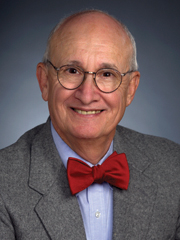 Kenneth Heilman, a seasoned professor who joined the UF faculty in 1971, shows no signs of slowing down.

Previously a UF Research Foundation professor in 1997, he has been called “the world’s best known behavioral neurologist,” and has dedicated much of his career to the study of Parkinson’s disease and movement disorders.

Heilman and his team demonstrated the cause of neglect, a profound and disabling disorder in which a patient is unaware of stimuli on the left side of the body. His research also proved that the right hemisphere is dominant for “when” action activities, including when to initiate and act, when not to act and when to stop actions.

“Prior to three decades ago, it was thought that the left hemisphere was dominant for speech and language,” Heilman says. “Our team demonstrated that it was the right hemisphere that was important for emotional communication including the understanding and expression of emotional prosody and faces.”

In his most current research, Heilman is attempting to develop tests that can easily assess dementia.

“I am beginning a research program to attempt to understand the neurological basis of creativity and the reasons why creativity diminishes with aging,” he says.

“The Department of Neurology at the University of Florida has long been identified as a leader in behavioral neurology research and clinical care, and continues to be so, largely because of Dr. Heilman’s influence,” says Edward Valenstein, chair of the Department of Neurology and director of the Neurology Residency Program at UF. “He has played a large part in the education and recruitment of other fine faculty members and is referred patients with neurobehavioral disorders from all over the country.”