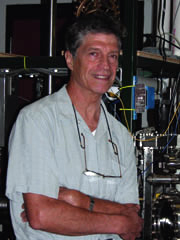 Arthur Hebard came to UF in 1996, after spending most of his professional career as a member of the technical staff at AT&T Laboratories.
Hebard, a professor of physics, specializes in condensed matter. His research focuses on the fabrication and characterization of thin-film structures, and the unusual physical phenomena that occur within restricted dimensions.
A thin film structure can be thought of as a sandwich containing different layers.
“We may start with a metal, cover it with an insulator and then cover it again with another metal or magnetic material,” Hebard says.
“Dr. Hebard’s research, which is rich in conceptual content, often has a significant applied component, and as a result he holds five U.S. patents,” says Alan Dorsey, chair of the Department of Physics.
Hebard has also developed a unique capability called SHIVA (Sample Handling In VAcuum) for the fabrication and characterization of ultra thin films. “It allows us to monitor the optical and electrical properties of thin films as they are being deposited and then transfer them to a vacuum chamber without exposure to air where they can be measured at low temperatu res and high magnetic fields,” says Hebard.
Hebard does much of his work through the facilities of the National High Magnetic Field Laboratory in Tallahassee, where even higher fields and lower temperatures can be obtained.