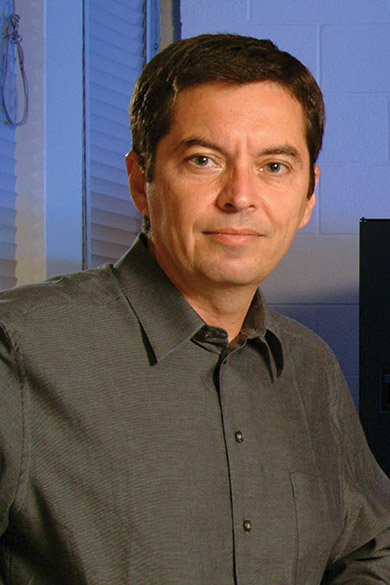 “I have always been interested on how science can help build bigger and faster computers,” Fortes said. “Nowadays, a possible approach is to combine many — from hundreds to many thousands — computers which are distributed but yet work cooperatively to function as one.”

This is termed “distributed computing.”

“I am keen to understand how to manage and coordinate such large numbers of machines so that their operational costs are small and their usage is not overly complex,” Fortes said.

Fortes views the focus of his research agenda as one that continues to aid in distributing computer information processing that is inspired and grounded by development and operation of cyberinfrastructure.

Currently, the systems his laboratory develops and hosts are being used by scientists worldwide to advance society’s understanding of biodiversity on Earth and how to preserve it for the benefit of the health, prosperity and security of future generations.

Fortes is a fellow of the top societies in his field (IEEE and AAAS), and he has consistently generated $1 million per year in research expenditures. The National Science Foundation has recruited him for various high-profile panels to provide advice on different NSF policies and future research directions. He is also the co-principal investigator in charge of all IT-related activities for the Integrated Digitized Biocollections (iDigBio) project, a project that spans a decade and brings in $20 million in NSF funding.

The goal of the project is to develop a national infrastructure that supports the implementation of set standards for digitization while building a custom cloud-computing environment for different collections.

Fortes’s projects have extensive national and international components, involving collaborators and users from over 300 universities in more than 10 countries. During the last five years, he has been the PI and co-PI of projects totaling over $20 million in funding. Since 2001, Fortes has been the founding director of the ACIS laboratory, which hosts over 25 faculty, staff and students and a machine room housing servers with over 2,000 processing cores and one million gigabytes of storage.