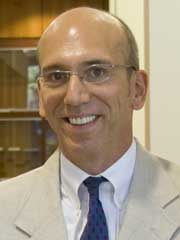 Mark Fenster has spent his career as a lawyer and professor exploring the limits of what we know about our own government.

Fenster, who graduated from Yale University Law School in 1998, has been quoted in Newsday and The New York Times as an expert on conspiracy and conspiracy theory.

His book, Conspiracy Theories: Secrecy and Power in American Culture, chronicles the history of conspiracy connected to the U.S. government from John F. Kennedy to today. After Fenster came to UF in 2001, he revamped the book to include conspiracy investigations concerning 9/11.

According to the literary review publication Bookforum, “Conspiracy Theories is a dangerous book. I suspect ’they’ (and you know who I mean, of course) will take care of this lone writer any day now.”

Since 2001, Fenster has published six articles and four essays in addition to teaching and revising his book. Robert H. Jervy, dean of the Levin College of Law, credited Fenster as “an extremely productive scholar, and we are most proud to count him among our faculty colleagues.”

Fenster’s current research focuses primarily on transparency in legal and political forums, a project that he kick-started in 2006 with his article, “The Opacity of Transparency.” Through his research, Fenster seeks to find the truth behind the concepts of open government and the freedom of the flow of information within a democracy.

His second project is a biography of the antitrust lawyer Thurman Arnold, who was best known for thwarting monopolies as the assistant attorney general in charge of the Antitrust Division of the Department of Justice in the late 1930s and early ’40s.

At UF, Fenster has taught courses on a wide assortment of legal subjects, including torts, land use, legal theory, secrecy, open government and intellectual property.