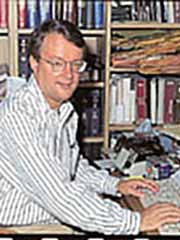 Ben M. Dunn is an internationally recognized leader in the field of proteolytic enzyme structure and function. His work focuses on enzymes from organisms that cause disease, including the HIV and hepatitis C viruses, as well as the malaria parasite.

Dunn and his associates have used the tools of molecular biology to clone and express a large number of enzymes.

They use a variety of techniques to quantitate the properties of the enzymes so that comparisons can be made between those of pathogenic organisms and those of the human host.

This analysis permits the discovery of subtle characteristics that make it possible to design selective inhibitors that will block the harmful enzymes while not disturbing the normal functioning of human cells.

Dunn was one of the first academic scientists to study the HIV protease. This enzyme is the target of the powerful protease inhibitor cocktail that limits the growth of the HIV virus.

He is continuing to work on this problem, since the virus is able to mutate and create new enzymes that are resistant to the first generation of inhibitors. This limits the success of the therapy.

A strong collaboration with Dr. John Sleasman of the pediatrics department and Dr. Maureen Goodenow of the pathology department has allowed UF to establish a leading position in this work.

A similar approach to drug development is being explored in the case of malaria. This is a major disease of the world, causing more than a million deaths a year, mostly in developing countries.

Dunn and his students are studying the properties of enzymes from the malaria parasite, Plasmodium falciparum. His work in this area is in collaboration with Dr. John Dame, chair of the pathobiology department in the College of Veterinary Medicine.

A new target in the Dunn laboratory is the protease of the hepatitis C virus. This new virus will develop into a major public health problem in the United States over the next 10 to 15 years. Dunn and his co-workers are establishing methods for working with the enzymes from this new pathogen.

Dunn has served NIH on the Biochemistry Study Section as a regular member. He has been appointed to a second panel dealing with AIDS-related grants. He has organized two major conferences on proteolytic enzymes, and plans a third in December 1999 in Gainesville. He is the editor-in-chief of two journals devoted to protein studies, and a co-editor of Current Protocols in Protein Science. He has edited a book, Proteases of Infectious Agents, that deals with the topics of drug discovery.