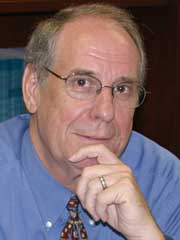 Professor and Chair of Health Services Research, Management and Policy

According to R. Paul Duncan, everyone deserves the peace of mind that comes with health insurance. After 10 years of research, however, he has discovered that about three million people in Florida can’t afford to get sick.

Through his research, Duncan seeks to measure the gaps that separate those who can afford health care and those who can’t. His 1999 survey on health insurance, which sampled 45,000 people in 15,000 households in 17 areas around the state, found that two million Floridians do without health insurance. By 2004, that number had climbed to 2.7 million. These surveys also found striking inconsistencies in insurance coverage, both geographically and demographically. Duncan’s research has since gained state and local recognition as a foundation for potential modifications to the health care system. In 2004, Gov. Jeb Bush appointed Duncan to the Governor’s Task Force on Access to Affordable Health Insurance.

In addition to the uninsured, Duncan has focused on Medicaid recipients and the consequences of Florida’s Medicaid reform project. With support from the Robert Wood Johnson Foundation, Duncan tied these two areas of interest in a national study on the connection between private health insurance and Medicaid.

Duncan has served as the director for the Florida Center for Medicaid and the Uninsured, which unites researchers to study on health care issues in the state.

He has been a reviewer for the National Science Foundation, the Department of Veterans Affairs, the Agency for Healthcare Research and Quality and the Centers for Disease Control and Prevention, among others. He has published about 100 refereed journal articles and presented at many national and international conferences.