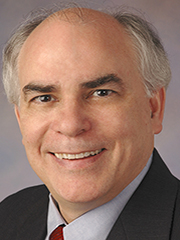 Research skills and a good bedside manner can coexist. The overarching goal of Dan Driscoll’s research is to blend meaningful discoveries at the laboratory bench and the patient’s bedside which ultimately will result in significant treatments for both children and adults. His research interests are focused in three interrelated areas that combine his clinical and basic science expertise; Genomic imprinting/Epigenetics; Prader-Willi syndrome; and Early-onset morbid obesity.

Driscoll, a professor of pediatrics and genetics and the John T. and Winifred M. Hayward Professor of Genetics Research studies Prader-Willi syndrome as a model system to understand genomic imprinting and early-onset morbid obesity. Genomic imprinting is a recently discovered phenomenon whereby certain genes are expressed differently depending upon whether they are inherited from the mother or the father.

“A disturbance in genomic imprinting in humans has been shown to play a major role in a number of birth defects, genetic diseases and cancers,” says Driscoll.

Driscoll’s laboratory developed a system over a decade ago which is now used worldwide as a rapid means to make the diagnosis of Prader-Willi syndrome as well as several other imprinted disorders. This methodology, in many cases, has allowed the diagnosis of Prader-Willi syndrome to be made at a much earlier age which has resulted in earlier treatment and better outcomes for this condition.

In addition, his laboratory was the first to propose and demonstrate a whole new class of mutations which are now called imprinting defects. This type of mutation has since been found in several other diseases and cancers.

Most recently, Driscoll and his colleagues have shown that early-onset childhood obesity is associated with cognitive impairment and white matter lesions in the brain. They postulate that the metabolic disturbances of early obesity could be having deleterious effects on the young, vulnerable brain.

“It’s well-known that obesity is associated with a number of other medical problems, such as diabetes, hypertension and elevated cholesterol,” says Driscoll, the lead author of the study. “Now, we’re postulating that early-onset morbid obesity and the subsequent metabolic/ biochemical problems can also lead to cognitive impairment.”