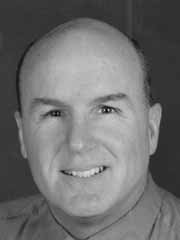 Stephen Dodd’s work as director of the College of Health and Human Performance’s Muscle Physiology Laboratory has earned him great respect from his colleagues and various national scientific organizations, such as the American Heart Association, the National Institutes of Health and the American Lung Association.

In the last five years, Dodd says his work has focused on “the adaptive responses of muscle to disuse.”

He has used whole muscle and single fiber models to better understand how muscles adapt to changes in use. These studies are particularly useful in “rehabilitative medicine, the study of muscle diseases and the ability of humans to endure long-term space flight,” he says.

In addition to his general knowledge of exercise physiology, Dodd’s research has provided him the opportunity to write two widely used textbooks, as well as have his work published in such prestigious journals as the Journal of Applied Physiology, Muscle and Nerve and Medicine and Science in Sports and Exercise.

Dodd provides graduate and undergraduate students with opportunities to conduct research that frequently results in national publications. He also spends a significant amount of time presenting research at regional, national and international scientific meetings and symposia.