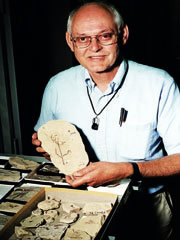 David Dilcher is in search of Earth’s first flower.
His 40-year hunt has lead him all over the world-China, Brazil, Australia and the United States-to find fossils of the earliest flowering plants.
“David is the top international researcher on the early evolution of angiosperms or flowering plants,” says David Steadman, associate director for collections and research, and chair of the Department of Natural History.
Over the years, Dilcher has found many “oldest flowers.”
“Our projects have started to reveal flowers from early ages in the Lower Cretaceous or even Jurassic boundary,” Dilcher says. “It became clear that we will not have only one first flower, but a bouquet of extremely ancient flowering plants.”
In a 2002 Science magazine article, Dilcher and his Chinese colleagues showed evidence that flowering plants originated in aquatic rather than terrestrial environments.
“I would single out this article of an effort of immense international impact,” Steadman says.
To obtain these findings, Dilcher and his team studied fossil flowers found in sedimentary rock, and fossils that represent the oldest, least known fossil flowers in the world.
“These ‘flowers’ we found are quite different than what we know today as a flower,” Dilcher says. “The plants have seed-bearing fruits as female parts and pollen-bearing organs as male parts. There are no petals and no other sterile organs to protect them or to attract insects to pollinate them.”