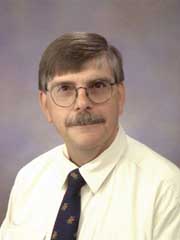 Simply inhaling and exhaling can sometimes be impossible for those afflicted with asthma and other respiratory problems. Paul Davenport’s research for the past 15 years has been focused on finding solutions for those with various breathing problems, most recently the way the brain and body come together to respond to restricted breathing.”Most of our breathing is located in the lower part of our brain, the medulla,” Davenport says. “I’m interested in the conscious part of our breathing and the emotional consequences of breathing difficulty.”

Davenport developed a test to measure if the cerebral cortex is activated when breathing is changed. He uses this along with behavioral tests to pinpoint the ways breathing is regulated, especially in asthmatic children.

“A small percentage of asthmatic children who’ve died from their asthma had a problem because they weren’t aware of their asthma attack,” Davenport says. “Their brain didn’t process the respiratory information very well and they also were poor perceivers of their breathing.”

Davenport and his team seek an understanding of why some people are better perceivers of their own breathing.

“It’s all related to respiratory neuro-mechanics,” Davenport says. “If it’s not working right, how does the brain change breathing to make it work better.”